The NCUA has updated its definition of a service facility with regards to shared locations. Learn what this could mean for your credit union and its members.

On November 18 of last year, the Board of the National Credit Union Administration (NCUA) issued a final rule to amend and modernize the definition of a “service facility” relating to federal multiple common bond credit unions in the Chartering and Field of Membership (FOM) Manual.

The main takeaways from the decision, which came into effect on December 27, are: 1) Shared locations are now considered service facilities regardless of whether a credit union has an ownership interest; and 2) Shared branches now meet the service facility requirement for underserved areas.

What is a Service Facility?

The definition of a service facility applies directly to the addition of both select groups and underserved areas to the FOM of a federal multiple common bond credit union.

Examples of facilities include a branch or mobile branch, a regularly operated office, an ATM or an electronic facility such as a video teller machine or kiosk.

How has the Definition of a Service Facility Changed?

Prior to the NCUA ruling, a credit union looking to expand its FOM by adding either groups or underserved areas was required to have an ownership interest in either a shared branch or the branching network providing the service facility itself.

Going forward, the ownership stipulation has been removed, meaning a credit union’s “participation” in a shared facility is now enough to qualify it as a service facility as relating to adding groups or underserved areas.

Here is a look at the definition itself and how it has been updated: 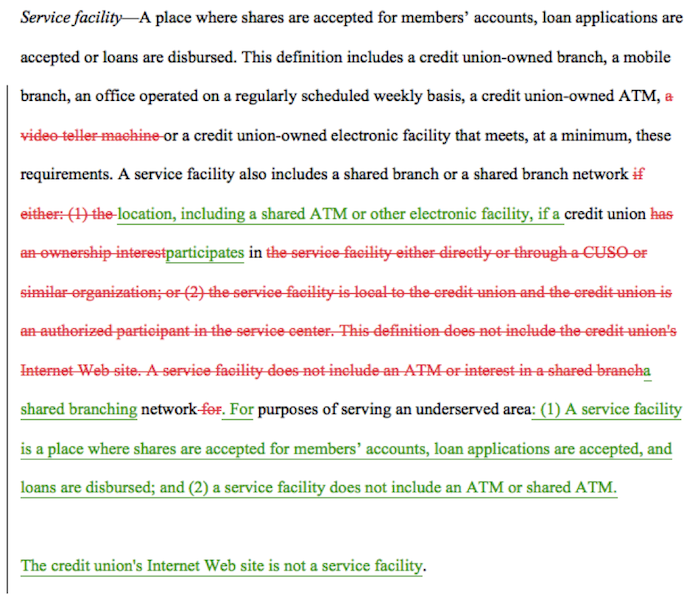 How Does this Impact Adding Groups?

The definition of a service facility varies depending on whether a credit union seeks to add groups or underserved areas.

As noted above, group additions are strictly regulated by geographical requirements. The Chartering Manual states: “A federal credit union’s service area is the area that can reasonably be served by the service facilities accessible to the groups within the field of membership.” And, more precisely: “the groups served by the credit union must have access to the service facility.”

The ruling therefore paves the way towards more group additions as, now simply by participating in a service facility, a credit union will be able to expand its overall service area to qualify new groups for membership.

How Does this Impact Adding Underserved Areas?

In terms of adding underserved areas: “A location must accept deposits, take loan applications, and disburse loan proceeds to qualify as a service facility for an underserved area. Just as for select group additions, an ownership interest in a shared branching network is no longer a requirement for a multiple common bond federal credit union using a shared facility to add an underserved area.”

There are two main distinctions between the updated definitions:

1) An ATM qualifies as a service facility for group additions, but does not qualify as such for undeserved areas; and

NCUA Chairman Todd M. Harper addressed this first discrepancy in his remarks on the decision: “during the consideration of the proposed rule, I noted that a leased ATM would not serve the needs of an under-resourced community well. The residents of these communities often prefer, and need, more personalized service.”

The numbers likewise clearly back the growth potential attached to adding underserved areas. According to CUCollaborate’s data, there are currently 1,769 CO-OP shared branches located in economically distressed census tracts, which would qualify as underserved. More than seven million people live in these areas. Zooming out even farther, nationwide over 43% of the total population—close to 140 million people—live in economically distressed tracts.

There is no doubt this move by the NCUA will have a huge impact on field of membership expansion. Mr. Harper, in outlining his support of the decision, stressed how the “rulemaking has the potential to expand access to safe, fair, and affordable financial services to individuals, including those who live in underserved communities.”

Understanding just how these new regulations will impact your credit union’s growth strategy can be tricky however, which is why CUCollaborate offers software and consulting services to provide a personalized solution tailored specifically to your individual institution. Contact us today and let us sift through the fine print and help your credit union make the most of these new opportunities.