How much money is available through grants? 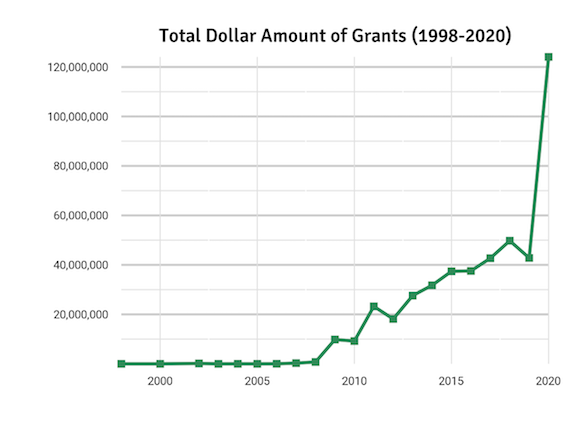 How many grants get awarded each year? 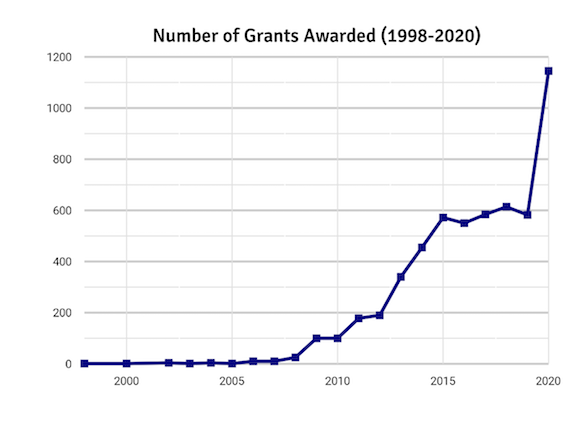 From 1998 to 2020, credit unions have received 5,446 grants total. The number of grants awarded per year has increased drastically from the early 2000s. Note the recent spike in grants awarded - there were about 600 grants reported by credit unions in 2019 and this number nearly doubled to 1,200 in 2020.

How many credit unions are receiving grants?

Over 1,500 different credit unions have received grants from 1998 to 2020. The line graph shows a steady increase in the number of credit unions receiving grants between 2005 and 2015, with a leveling off beginning to happen in the following years. This leveling off was disrupted by a huge increase for the year 2020.

What is the typical size of a grant? 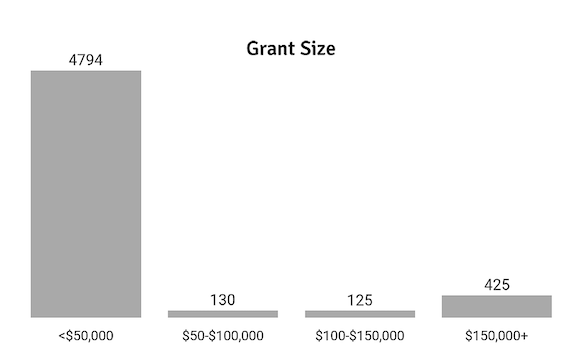 Although there have been some sizeable grants, the majority of grants are less than $50,000. In this way, it seems that smaller credit unions may have more to benefit from receiving grants as these grants would make up a larger proportion of their assets than larger credit unions. In fact, credit unions below $10 million in asset size received grants that averaged 1% of their assets.

Who is giving the highest dollar amount in grant money?

The CDFI Fund is by far the largest provider of grants when it comes to dollar amount. The CDFI Fund is responsible for nearly $300 million in grant funds given throughout the years.

Who is giving the highest number of grants?

Although the CDFI Fund accounts for the majority of grant money given, credit union leagues have provided 2,223 grants throughout the years, making them the most common source of grants. The second most common source is the NCUA, which has given 1,500 grants.

How does the distribution of grants differ by asset size?

When we break down the grants by amount. We see that the larger credit unions are getting a larger amount in grants. This makes sense because credit unions with more assets typically have more members to take care of, so grant size would be higher in order to produce better member benefits. 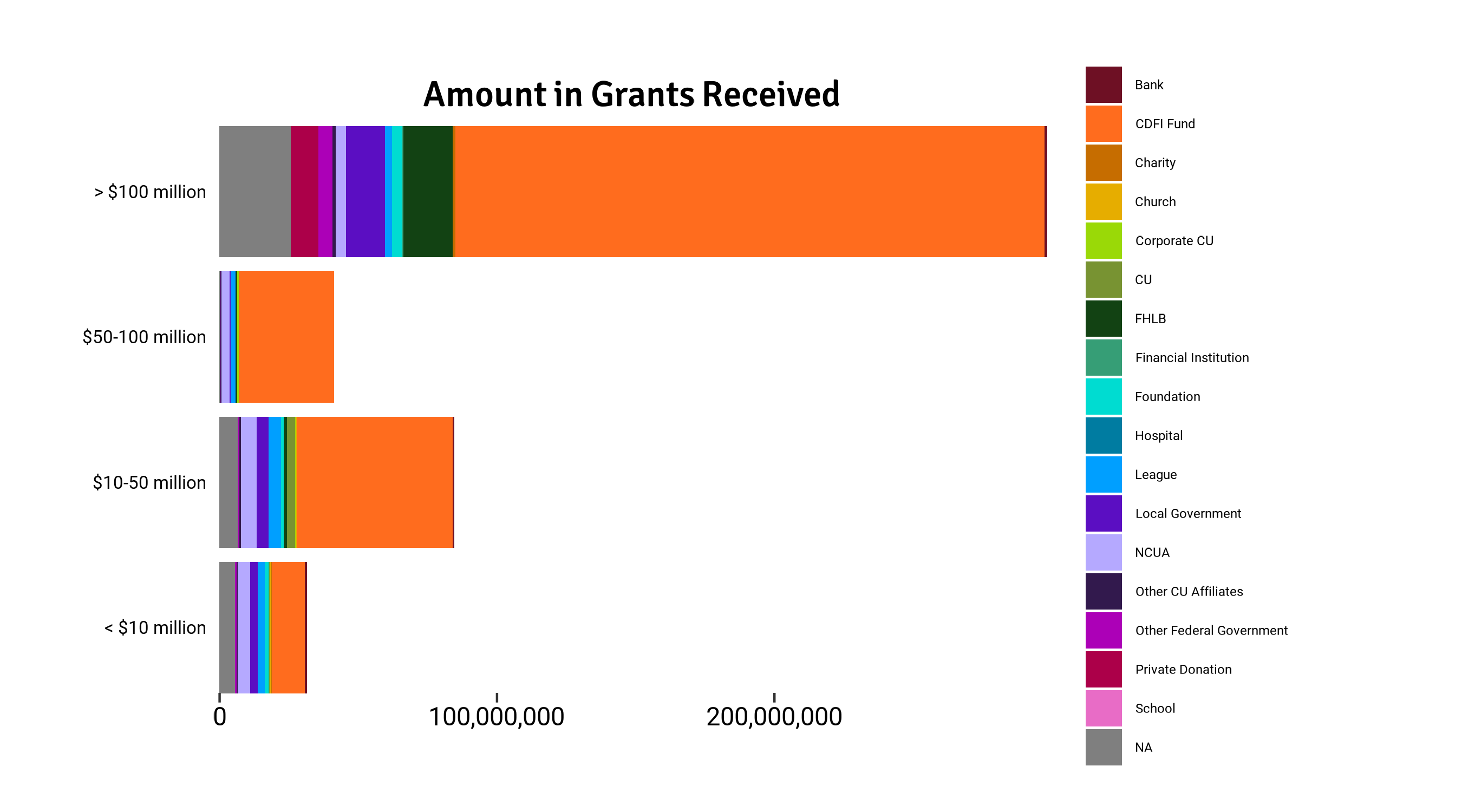 By breaking down these amounts by source, we see how the CDFI Fund is a major source of grant funds for credit unions of all sizes. 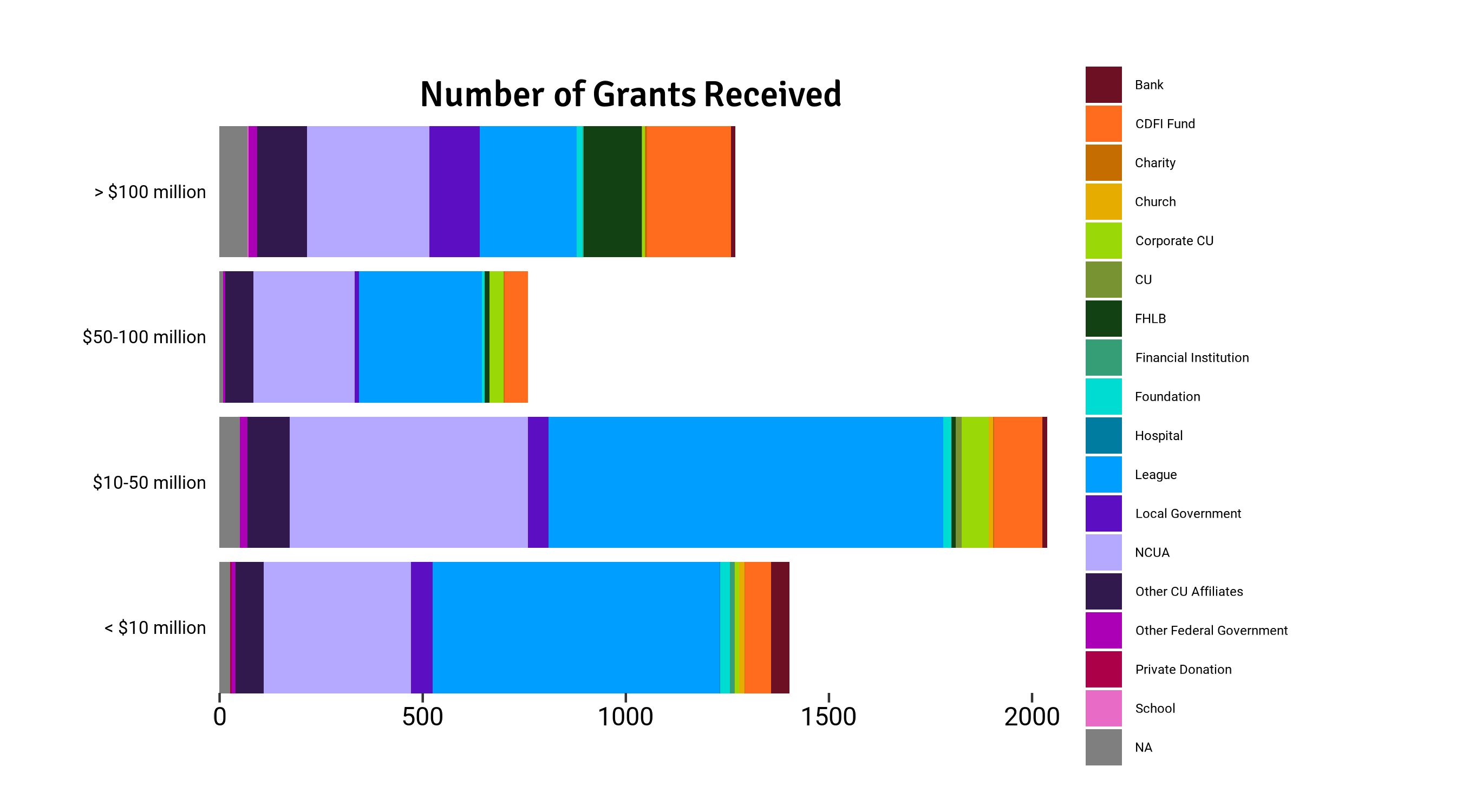 When we break down these grants by source, a couple of patterns can be discerned. First, smaller credit unions receive a higher proportion of grants from credit union leagues than their larger counterparts. Second, larger credit unions get more grants from Federal Home Loan Bank (FHLB) and local governments.

How do sources of grants change over time? 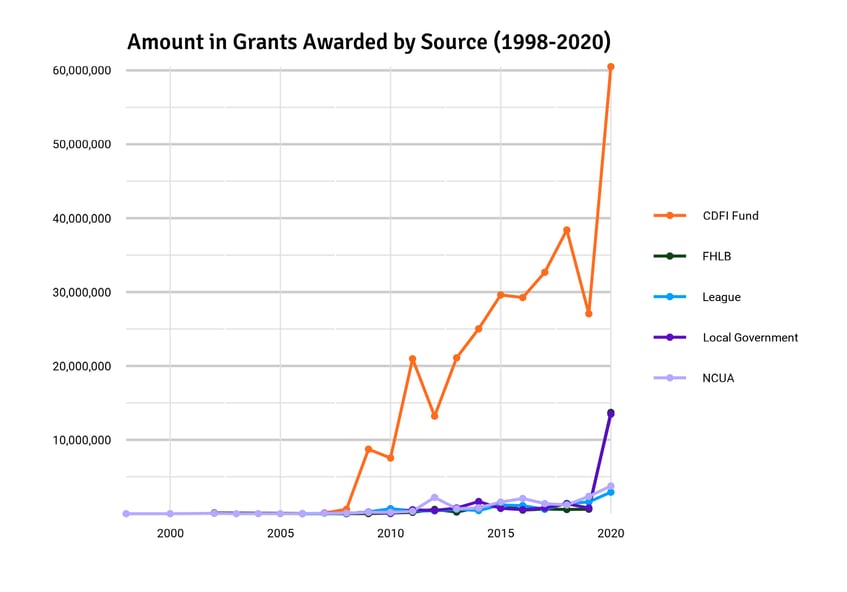 Visualizing data on grants received by credit unions led to some compelling insights. When looking at grants given by year, the "people helping people" philosophy of the credit union industry really shined through in the wake of the COVID-19 pandemic: the number of grants increased nearly two-fold and the amount in grant money increased over three-fold when compared to 2019. This can be attributed both to the increased need of grants as well as the increased availability of grants due to relief funds distributed as a result of the pandemic.

Another interesting find was the huge amount of money that is made available through CDFI Funds. If your credit union is interested in receiving CDFI Certification, learn more about how CUCollaborate can guide you through the CDFI certification process and schedule a consultation on our website.