More than 30 businesses and non-profits, including the credit union group Inclusiv and Hope Credit Union on Monday called on the Biden Administration to create a presidential commission to develop a national, interagency financial inclusion strategy.

In the letter, the groups noted three Democratic senators, Sens. Christopher Coons of Delaware, Raphael Warnock of Georgia and John Hickenlooper of Colorado proposed such a commission last year, adding that they fully endorse that effort.

“While each sector is doing what it can to build an inclusive financial system to fully address the systemic barriers to financial inclusion, we need to coordinate meaningful action at the highest levels,” the groups wrote.

Technology May Only Widen Gap

The groups further claimed the U.S. has taken a fragmented approach to financial inclusion, adding that as the economy becomes more digitized, it becomes even more important that technology-driven systems be designed for financial inclusion.

“Making sure that every person in America has easy access to safe and affordable bank accounts, payment tools, saving and retirement accounts, credit, insurance, and safety net programs when needed would be a critical—and monumental—step toward an inclusive economy,” they stated.

Under the proposal, the commission would be a mix of senior government officials, members of historically excluded communities, consumer advocates and representatives of the financial services community.

Inclusiv, headquartered in New York City, is a certified Community Development Financial Institution (CDFI) intermediary whose stated mission is: “To help low- and moderate-income people and communities achieve financial independence through credit unions.” The association has long supported and advocated for its member community development credit unions, as well as provided both capital and other opportunities to help people living in distressed and underserved communities access financial services. 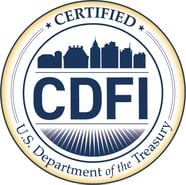 How Your Credit Union Can Access the CDFI Program

To learn more about the benefits of the program, as well as how to qualify, visit our CDFI Certification page or reach out to us directly through our consulting services today!