“Here we have a rising industry that is growing and will only continue to grow,” Hood said, according to the text of his speech to the Emerging Markets Coalition, an advocacy and educational group. “And yet the basic commercial banking infrastructure needed to provide financial services to this rapidly growing industry is virtually non-existent.” 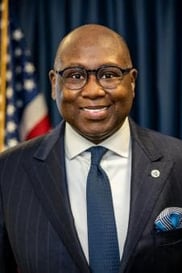 The Honorable Rodney E. Hood of the NCUA

Financial institutions that provide banking services to marijuana-related businesses open themselves up to sanctions from regulators because marijuana has not been legalized on the federal level. That remains the case even in states where cannabis has been legalized.

The House has passed legislation that would allow credit unions and banks to provide financial services to marijuana-related businesses where cannabis is legal. However, the Senate has not considered the legislation. Senate Democratic leaders have said they want to consider the banking proposal as part of a comprehensive legalization bill.

Credit Unions and the Cannabis Industry

Hood said that at last count, 202 credit unions have been providing financial services to cannabis-related businesses. He said the NCUA has an internal working group focused on preparing for Congress to enact marijuana banking legislation.

“So, know that regulators are working to prepare the ground for what comes next, even if those efforts are not entirely visible right now,” he said.

Hood noted that the agency has compiled a compendium of state laws related to marijuana so that NCUA examiners can refer to relevant state rules as they deal with credit unions. “We’re trying to offer as much clarity and direction as we can, while we await definitive action from Congress,” he added.

Why the NCUA is Pushing For Change

Hood stressed that current policy is unsafe because many cannabis businesses are limited to conducting transactions in cash, making them a target for criminal activity. Marijuana-related businesses, he said, are being “unfairly marginalized and stigmatized in the marketplace.”

Further, he emphasized, the policy is shortsighted because it denies an entire industry access to the capital and financial services it requires while in turn local, state and federal governments are not receiving tax revenue they need.