Bill that would allow credit unions and banks to serve some cannabis-related businesses unlikely to pass this year according to NCUA board member.

“We do have to face the reality of the legislative calendar,” Hood said at the annual PBC Conference, which brings together businesses, financial institutions, and compliance experts within the cannabis industry. “At this point, I would be surprised if Congress moved on this issue this year—it’s not impossible, but the available time grows short. We’re just a few weeks away from midterm elections, so we’re very likely looking at next year, at the earliest.”

Hood said the failure to enact legislation is keeping everyone involved from doing their jobs, adding that legal cannabis businesses cannot plan for the future and financial institutions struggle with how to serve the industry in states where marijuana is legal.

“And if you’re like me, on the regulatory side of things, the lack of clarity is making it hard for us to tell you all what you need to be doing,” he stated.

Background on the Issue

Hood has been an outspoken advocate of congressional action to provide financial institutions with a regulatory safe harbor in states where marijuana is legal. The House has passed that legislation several times, but the Senate has not considered it. The House also included the marijuana provisions in other must-pass legislation, including a measure increasing competitiveness with China.

The Senate, however, has not agreed to include the provisions in those bills.

Senate Democrats have introduced a comprehensive marijuana legalization measure that includes banking provisions. One of the bill’s sponsors, Sen. Cory Booker, D-N.J., revealed recently he is willing to consider a more scaled-down version this year. That bill, he said, would include banking provisions.

Hood Calls for Consistency in Regulations

Meanwhile, Hood contended the lack of clarity is causing problems.

He noted that according to press reports, a Vermont credit union that had been serving marijuana-related businesses in that state recently decided to stop.

“With recreational cannabis use now legal in Vermont, the credit union had received a spike in applications from a large number of cannabis enterprises for accounts,” Hood explained. “But they were concerned they did not have the compliance mechanisms in place to service so many new accounts.” 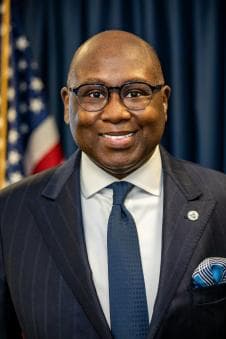 He added that several state legislatures have recently enacted legislation intended to make it easier for financial institutions to serve cannabis businesses, but he warned that is not the solution to the problem, saying, “A patchwork of state-level solutions won’t provide the clarity and consistency we need for regulatory purposes.”

Hood also revealed that the NCUA has an internal working group focusing on cannabis issues and that he has suggested the formation of an interagency working group to help coordinate efforts.

In releasing the directory, Joshua Radbod, the organization’s co-founder and CEO, said, “This Cannabis Banking Directory is a direct response to one of the questions we hear the most from CRBs (cannabis-related businesses) and partners: ‘We need a bank—who will work with us?’”

Of the 40 financial institutions listed in the directory, ten are credit unions.