Amendments could have large impact on credit union industry, however inclusion remains uncertain.

Whether or not they’ll succeed is another question altogether.

The annual defense bill is one of a few pieces of legislation that is considered to be a must-pass measure. And so, House members try to attach their pet issues onto the bill as it winds its way through the legislative process.

This year is no exception. Comb through the 1,144 amendments submitted to the House Rules Committee on H.R. 7900, and you’ll find several proposals related to the financial services industry, regardless of whether they have anything to do with defense.

Democratic efforts may be more urgent this year, since many analysts expect Democrats to lose majority control of the House in the November elections.

Rules Committee members will sort through the proposals and allow some—but not all—to go to the floor when the defense bill is considered. The committee has not yet scheduled a meeting to consider the amendments.

It is unclear whether the Senate defense bill includes any of the proposals or whether senators will accept them in a House-Senate conference. The Senate Armed Services Committee has approved its version of the legislation but has not yet released the text of the massive bill.

Some of the proposals by House members have better chances than others of being included in the House bill.

For instance, Rep. Ed Perlmutter, D-Colo., wants to attach his marijuana banking legislation. The bill, which has passed the House several times, would provide credit unions and banks providing financial services to a marijuana business in states where cannabis is legal with a regulatory safe harbor.

Under current law, financial regulators could sanction a credit union or bank for providing those services, since marijuana is illegal on the federal level.

Perlmutter is a member of the Rules Committee, so he may have an advantage over other House members seeking to offer amendments. He succeeded in getting the proposal, known as the SAFE Banking Act, attached to last year’s defense authorization bill, but it was dropped in a House-Senate conference. He also succeeded in getting the plan attached to the competitiveness bill now in conference but has said that conferees have dropped it.

This time around, in an apparent move to link the marijuana plan to defense issues, Perlmutter has the support of 14 veterans groups in his effort. 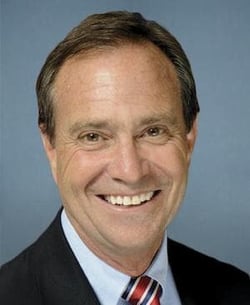 “As I’ve repeatedly said, I will pursue any and all legislative avenues to get SAFE Banking across the finish line this year,” he stated. “We have a critical window of opportunity between now and the end of the year to enact common sense cannabis reforms starting with access to the banking system. Continued inaction on this issue is dangerous and neglectful, and continues to put communities, businesses, employees and patients at risk across this country.”

Perlmutter is retiring at the end of this Congress, increasing his urgency in getting his plan across the finish line this year.

The proposal includes language that would require federal agencies to place a high priority on using MDIs to hold their deposits.

Waters also wants to offer an amendment that would extend the pandemic-related CLF borrowing changes.

The amendments that Democrats want attached to the defense bill also include:

–An amendment by Rep. Madeleine Dean, D-Pa., to allow all notaries to use remote notarization, a proposal supported by credit union trade groups.

–An amendment by Rep. Emanuel Cleaver, D-Mo., to establish a grant program for states, nonprofit organizations and colleges and universities to promote diversity in the appraisal industry. (A federal task force that included the NCUA earlier this year reported that racism is still a problem in that industry.)

–A plan by Rep. Donald Payne, Jr., D-N.J., to protect the right of consumers to pay cash at all retail establishments for transactions under $20,000.