Low response rates and survey results combine to indicate room for growth on diversity and inclusion within the credit union industry.

Of the 4,492 federally insured credit unions that existed at the end of 2021, just 240 institutions (5.3%) carried out the self-assessment. Despite the low total, the number actually represents a 27% increase from those responding in 2020.

The NCUA board has discussed finding ways to increase participation in the annual survey, but it has remained a voluntary effort.

What Did the Survey Results Reveal?

The data from those self-assessments that were completed make up part of the agency’s annual Office of Minority and Women Inclusion (OMWI) Report to Congress, released earlier this week.

They revealed that only 42% of respondent credit unions hold management accountable for diversity and inclusion efforts. 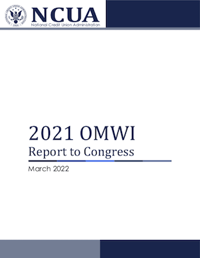 Further, it was found that:

–53% of the credit unions responding said they have a diversity and inclusion policy that is approved by senior leadership.

–57% said they evaluate their diversity and inclusion policy on a regular basis and identify areas of possible improvement.

–12% of the credit unions reported they have a written supplier diversity policy that provides minority- and women-owned businesses the chance to bid to deliver goods and services.

–27% said they publicly report on their diversity and inclusion policy and include demographic information about board members and other officials.

–54% said they conduct an evaluation of diversity policies and practices on an annual basis.

Diversity and Inclusion Within the NCUA

The OMWI report also reflects on diversity and inclusion efforts inside the NCUA itself, including demographic information about its employees. The agency reported that 43% of its current employees are women—a figure that is unchanged from last year.

The NCUA also disclosed that minority representation among employees increased to 31.2% in 2021, compared with 30.5% the year before, while noting Hispanics, Native Americans, and Pacific Islanders remain underrepresented at the agency.

Looking ahead, the NCUA claimed that in 2022, OMWI “will focus on coordinating the plans for a targeted barrier analysis to identify challenges in the hiring and retention of women and Hispanic or Latino employees within the agency.”