It was only a matter of time before the business community got fed up with Consumer Financial Protection Bureau (CFPB) Director Rohit Chopra.

After all, he has been notably aggressive in his policing of the financial services sector.

Now, it has happened.

The U.S. Chamber of Commerce this week announced an extensive campaign to “expose and defeat [Chopra’s] ideologically driven agenda to radically change the nature of America’s financial services industry,” asserting that, “If allowed to proceed, his agenda would harm consumer choice and innovation.”

“Director Chopra is attempting to use the CFPB to radically reshape the American financial services sector,” said Neil Bradley, executive vice President and chief policy officer at the Chamber.

He continued, “By willfully mischaracterizing the state of competition in the market Chopra is laying the groundwork to force the financial services sector to comport with his personal vision of the appropriate size of companies and what products and services should be offered and under what conditions.”

The Chamber stated the CFPB director has committed a series of misdeeds, noting that he has previously expressed a viewpoint of financial regulators as being “clueless and often corrupt lawyers and economists...often seen as auditioning for a future job.”

Further cited was Chopra’s use of the term “junk fees” to describe overdraft and other late fees charged by credit unions and banks.

The Chamber revealed it is launching a new six-figure digital ad campaign charging that Chopra is an unaccountable, radical regulator. The trade group also has filed six Freedom of Information Act requests for various documents, including a request for the agency’s current procedural manual. Finally, the Chamber’s Litigation Center has issued two letters describing Chopra’s decisions as “unlawful and imprudent.”

Additionally, the Chamber, alongside both the American Bankers Association and the Independent Community Bankers of America, issued a white paper on that topic.

“The Bureau has exceeded its authority by extending fair-lending laws beyond the bounds carefully set by Congress,” the white paper states. “The Bureau should rescind its misguided action to respect the limits Congress placed on its authority.” 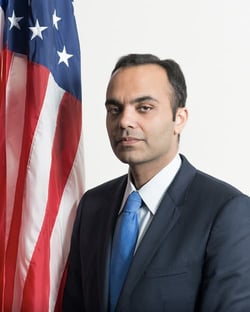 For his part, Chopra seems unbowed. This week, the CFPB released a report contending that financial institutions decreased consumers’ lines of credit during the economic problems caused by the pandemic. The agency also issued one advisory opinion attempting to rein in fees charged by debt collectors and another telling states that they may enforce Fair Credit Reporting Act laws if they are stricter than the federal statute.

Support from Some Consumer Advocates

“The U.S. Chamber loves to pretend to represent everyday working Americans while they frequently do the dirty work of their greedy corporate funders like big banks that have a history of fleecing consumers,” stated Liz Zelnick, spokesperson for Accountable.US.

“Complaints from the Chamber—and banking trade associations—about CFPB enforcement of anti-discrimination rules on financial products are particularly shameful,” Americans for Financial Reform said, in a statement. “Wall Street professes a commitment to fighting racism in their public relations but fights back when anyone tries to make them live up to their words and hide behind their powerful Washington lobbying groups when they do it.”

The decision to issue that request for comment led to the resignation of then-FDIC Chairwoman Jelena McWilliams, who had not signed on to the request.

The letter strongly implies that Chopra may have misled the committee in testimony about the merger decision.